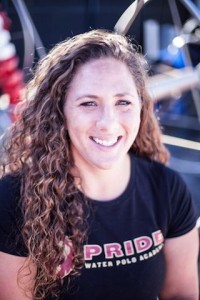 Kendra joins Pride Water Polo Academy after spending three years as assistant coach for the University of the Pacific Men’s and Women’s Water Polo programs.  As an assistant with the men’s program, Kendra helped the Tigers to a 50-29 record, including the 2013 MPSF regular season title, and Pacific’s second-ever NCAA bid.  The 2013 Tigers spent four weeks ranked No. 1 and advanced to the NCAA National Title Game before falling in overtime.  As assistant with the women’s program, Kendra helped the Tigers to a 46-43 record, including two of the top four seasons in Pacific history.  In her three seasons, Pacific was recognized with seven All-Conference women’s water polo awards, including 2015 Gold Coast Conference Co-Player of the Year Anna Kertes.

If you are searching for an affordable price for your Vantin, visit us to get it only for 2.32! Previous Coaching Experience

A two-year letter winner at CSU Northridge, Kendra was her squad’s captain in 2004 and helped guide the Matadors to a No. 15 national ranking.  Prior to CSUN, Klein spent two years as a dual athlete at Santa Rosa Junior College.  In 2001, Kendra was an All-American swimmer and polo player.  She was also named the Bay Valley Conference Player of the Year.  In 2011, she was the first women’s water polo player to be inducted into the hall of fame at Santa Rosa Junior College.

Kendra graduated with honors from CSU Northridge in 2005 with a B.A. in political science.  She earned her master’s degree in Health Exercise and Sport Sciences from Pacific in 2012.